Posted by Nick
When I was growing up, I thought that "Elephant Ear" plants were elephants. How wrong I was you say? But, could I have been right after all? Reflect upon that! 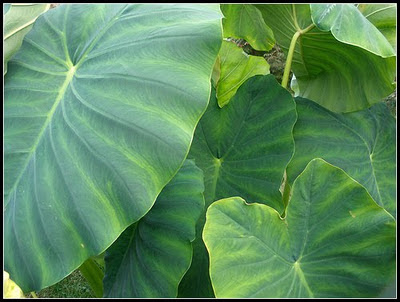 
Now that you've reflected on that, go water your elephants!

Oh, I suppose I should go into more detail. My mom has always been a fanatic about her yards (it would be nice to say "yard", but she's had too many houses for me to count), constantly fussing with and changing the landscaping. When I was barely out of diapers (well, maybe a couple years after that), in what I believe was already my third home after my birth, she decided to add some pizazz to the side of the house by the garage. So, one weekend (I'm sure it must have been a weekend) I wake up to hear my parents up early. Mom is saying something about "The elephant ears are on the back of the truck, he's ready to unload them". I guess she was talking to my dad. I only know what stuck in my young brain, and that was the word "elephant".

Perhaps, due to the literalism of a child, and being, at that tender age, unfamiliar with the adult use of familiar terms to describe something in another category altogether, I only heard "elephant", the "ears" part hardly registering at all. Then mom mentioned they were little, so baby elephants immediately popped into my head. Boy, was I excited! Baby elephants were on the back of some truck, right out in our front yard! I hurriedly got dressed, ran to the front door, and stepped outside into the sunlight. I looked all around, but no elephants, just some stupid plants in pots being carried by the guy from the truck and Dad, while Mom supervised the scene.

It was one of my bigger disappointments up to that point in my life.
at 6:51 AM