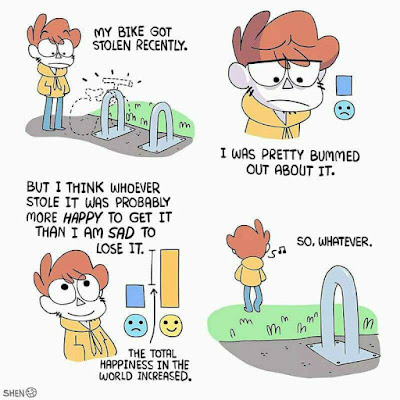 This can only likely be true in a world where people don't come to this conclusion. If everyone is like "meh, whatever, he probably needed it more..." Then it almost certainly won't be true, because why limit your theft and parasitism at all? Just take whatever, no matter how feeble and transitory your desire for it. But if there is resistance and retaliation for parasitism and theft then it is much more likely to be true, because people are less likely to engage in them unless some more compelling value is on offer.-Eli Harmon Additional reactions:

(And it's still only ever going to be true for liberals, who derive positive satisfaction from virtue signaling their cuckoldry. Normal people perceive a loss due to theft far more acutely than they would the same loss due to accident or any other cause, with good reason. A thief is a threat not only to this possession or that, but to the entire normative fabric upon which all good things depend.)

People who justify others theft of their stuff also tend to justify their political attempt to steal from you by that same logic that you won't miss your stuff as much as those in need who want your stuff. Solution: encourage the poor to feast on the wealth of rich liberals who will put up the least fight.

Someone should make a comic like this, but replace the guy with a stolen bike with a woman who's been raped. Then, perhaps, the absurdity of this reasoning would be more apparent.