Why Obamacare Will Fail

Posted by Nick
Unfortunately, politicians being the economic jackasses that they are, as well as those who believe their rhetoric, seem unusually proud of their stupidity in the belief that politics, legislation, regulation and socialization of health care in America will somehow change the laws of economics and allow health care providers to juggle all three and deliver them to their maximum potential. No one really seems fully aware of the relationship between these three fundamental economic forces. The vector diagram below shows the actual relationship between them. In the American health care debate, the fast, cheap and right aspects each equate to maximum accessibility, maximum affordability, and maximum quality, respectively. 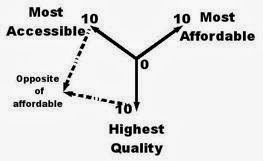 Hopefully, you can see where this progression is headed. I shouldn’t even need to show you the effect of what Obamacare (or any centrally-planned, socialist scheme) actually creates under the requirements of being delivered to maximum affordability, maximum accessibility and maximum quality. It ain’t gonna happen because that is a vector which sums to 0 — ZERO, ZIPPO, ZILCH, NADA. It may be able to happen in some imaginary, higher-dimensional Universe, rotated through another axis at right angles to the ones we operate in with our known laws of physics and economics. That Universe would be arranged along a line into, or out of the page or monitor you’re viewing, but it will never happen in the known Universe.-Economics and Vector Math: Why Obamacare is Doomed to Failure
I took a couple of paragraphs and only one of the diagrams from the above link, so go there for the whole thing, which is licensed under Creative Commons
at 5:10 PM