Huntsman Out, Everyone Else Is In… South Carolina

Posted by Unknown
With John Huntsman out of the race, only one candidate stands to benefit: Romney.

Since the beginning of the race, Huntsman has suffered from being utterly redundant. If Republicans wanted a Mormon with a history of catering to liberals, they were already voting for Romney.

Huntsman had pinned all his hopes on Hew Hampshire, but strong support for Romney and Paul quashed any hope that his campaign might slip into the ever-rotating not-Romney “frontrunner” slot among media outlets. Huntsman was only projected to win about 5% of the vote in South Carolina, and his departure is unlikely to shake up the race very much.

Among the remaining candidates, Romney is still the clear frontrunner in both South Carolina and Florida. He’s projected to win by double digits in both states right now.

Romney will likely win both states, and I imagine Perry will be the first to depart after South Carolina. He has poured more into SC than any other, and he probably won’t even finish in the top three. Paul and Santorum are in a dead heat 21 points behind Romney in that state, and this was before Huntsman’s departure.

In Florida, whose primary is ten days after SC’s on the 31st, Gingrich is polling in second place. There is a sharp split among non-Romney voters, and this is playing to Romney’s advantage.

Romney is all but certainly the Republican nominee at this point. I think Perry will drop, followed possibly by Santorum, followed by Gingrich, with Paul holding on the longest. I don’t imagine Paul will be polling in second, but I think the finality of this – possibly his last – campaign will drive him to stay in, perhaps until Super Tuesday (though I doubt it).

Besides Romney, Paul is the candidate to watch in this campaign. In many ways, he holds the power to single-handedly give Obama the presidency. There has been speculation (though none of it credible, in my eyes) that Paul will run as a third party candidate. Even I have flirted with speculating on the topic, and I have little doubt Paul could Nader the 2012 election, but I don’t think he would.

I think Paul’s principles run deep, and he certainly is independently minded, but he has his allegiances. After all, he’s no Bernie Sanders. Paul self-associates himself with the Republican Party, and while he will vote his own agenda, I don’t think he would deliberately sabotage the Republican Party to the benefit of Democrats.

It’s been an interesting nomination process so far, but the real entertainment has been in watching the party that supports unregulated campaign donations be purchased by Mitt Romney, and to see how unhappy they are about it. So rarely do you get to watch half the country squirm as they reap what they sowed. 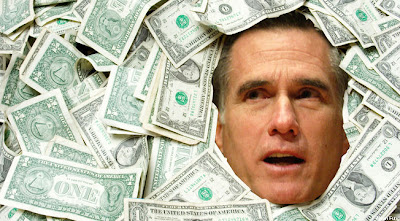