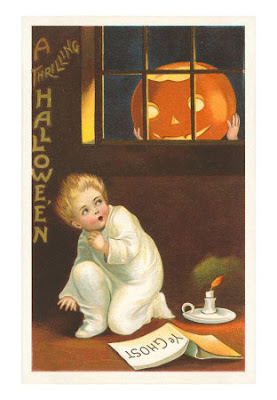 Word came down of the Great Pumpkin Carving Contest. All the departments would compete. What would we do? I suppose we could have asked What Would Jesus Do?, but then religion is best avoided in the workplace, and besides, aren't the real Buy Bull believers Halloween (Satan's holiday) haters? Well, maybe not:

Someone sent out an email asking for ideas, without many coming back. How about a political theme? An Obama jack-o-lantern and a McCain jack-o-lantern. 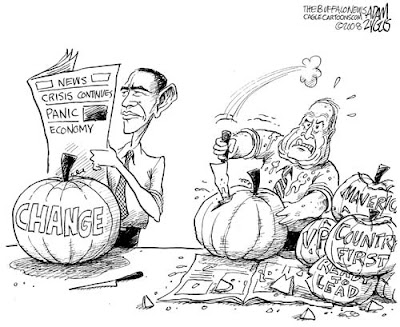 Then another word came down from on high. No political messages at work! That's right, because someone might be offended. Just as you can't have any pictures or view any websites (no matter how innocent) that could be considered sexual harassment, you also can't show any support for a political candidate. I love how these things converge. The politically correct brought us the whole panoply of sex harassment rules, and now the same idea is used to undermine the politically correct pro-voting, pro "democracy" message. It's a political sin not to vote, and also to show any enthusiasm for a candidate at work. The corporate, banking, government plutocratic system needs us peons to keep believing in the system or it will all come crashing down. Thus every couple of years we get to vote for the Demopublican or the Republicrat candidate and pretend that we the people are the ones in charge, while behind closed doors our fascist rulers laugh it up at what complete fools we are (by the way, my spellcheck just rejected demopublican and republicrat, splitting the latter in two with this suggestion: republic rat - sounds about right!), and yet they tell us not to openly support the phony of our choice.

Well, suffice it to say, the politics idea was scrapped. How about a horror movie! Joe was assigned the job. He is to buy a pumpkin, and will pay for it himself, stating that one little ol pumpkin won't break him. The problem is time, as these things must be done delicately and not too soon, preserving a fresh pumpkin for maximum presentability. Joe needs to find the time, for as he said himself, people have to work, they don't just sit around all day carving pumpkins. Maybe Joe should try the George W. Bush approach: 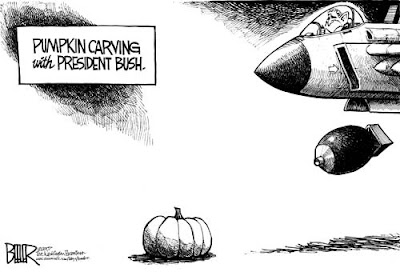