We Need Gun Control...for the Government 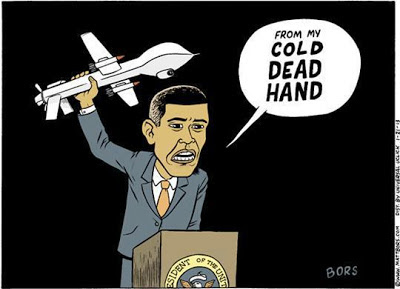 In Newtown, shooter Adam Lanza's weapons killed twenty kids, six teachers and his mom and shocked the nation. As Robert Dreyfuss recently pointed out here, American weapons have killed hundreds, probably thousands of kids in Afghanistan. In that one country alone, all sorts of people have US weapons. (The sales are good for the US economy, even if the weapons are used with some regularity against Americans.) Afghan soldiers carry US guns. So do some of the former Mujahadeen “freedom fighters” the Army’s up against. (The United States sold them guns when the freedom they were fighting for was from Soviet, rather than US occupation.) US troops carry US guns too, of course. Last March, an army sergeant used his to methodically slaughter sixteen civilians, including at least nine kids in their homes in southern Afghanistan one Sunday morning. And then there are those drones. Seven drone attacks in the last two weeks have killed an estimated forty people in Pakistan and Yemen so far this year and we're not even half way through January. The Bureau of Investigative Journalism reports that from June 2004 through mid-September 2012, drone strikes killed 474-881 civilians, including 176 children. For all the droning on about violence, it would be good to hear someone drone on just a bit about drones.-How About Gun Control for the Pentagon? Yes, it would be good, but "liberals" are lying hypocrites. If George Bush had Obama's record, they'd be screaming for his head, but where's the outrage about Obama's killing of innocents with drone strikes?
at 5:31 AM