Posted by Nick
That's the number of this post, the 6,480th to be published here at Skeptical Eye. In honor of this breakthrough, this milestone, this stunning accomplishment, I titled this post Number 6480. And speaking of numbers, why don't we. Like, how about "40 years of Everlasting Fun", and I don't mean by that some preacher who died in 1972 and has being living it up in the sexless, alcohol-free wonderland called Heaven ever since, looking down on this poor planet as his grandchildren drink, fornicate and embrace sodomite rights while refusing to eat at Chick-Fil-A (word has it that in Heaven you can have as many Chick-fil-A sandwiches as you wants and you never get sick of them - or sick on them; remember, no sickness in heaven). No, I'm talking about this fellow: 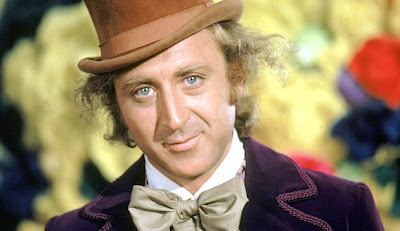 2011 was the fortieth anniversary of the only good film adaptation of Roald Dahl's classic children's book Charlie and the Chocolate Factory. Financed by the Quaker Oats Company, the film opened in theaters on June 30, 1971. It did not do spectacular box office, but like many classics, it finally found its audience in regular television broadcasts and on home video. I had a copy on DVD, but it was older and I don't think it contained the special features the new DVD has (I could be wrong, but I misplaced my old copy anyway, so I may never know), which include a documentary and a commentary with the "Wonka kids". I just happened to see it in the $5 Walmart DVD bin and grabbed it (actually, I saw it and then hid it under some other DVDs cause I had to go use the restroom first, and when I got back I thought someone had taken it! But no, it had only slipped beneath a copy of Just Married. Speaking of which, one of that dreadful movie's "stars", the dreadful Ashton Kutcher, whom I've always hated ever since I could pronounce his name, turns out to be a horrible human being.

Kutcher's claims that 100,000 to 300,000 American children were sold into sexual slavery were criticized by newspaper the Village Voice, which gave evidence refuting the claims. Kutcher represented a study referring to minors "at risk" for sexual exploitation as referring to children actually being prostituted. Experts estimate the true numbers to be in the hundreds, not the hundreds of thousands.[45] Kutcher reacted to the criticism by accusing the Village Voice of promoting child prostitution and using Twitter to request that Village Voice advertisers including American Airlines, Disney, the City of Seattle, and Domino's Pizza withdraw their advertising from publications owned by the Voice's parent company.-Wikipedia

In other words, someone called him on an obvious numbers untruth and he set out to kill the messenger, using low down, dirty, despicable means. I therefore conclude that anyone who still watches Two and a Half Duds is an idiot and a Kutcher cock-sucker. Long live Charlie Sheen and the real series! But wait, I was discussing something else with you, wasn't I? Oh, yeah, Willy! The recent auction of memorabilia from the iconic film included that unmistakable purple Willy Wonka costume. It was expected to fetch $80,000 to $120,000 but I could imagine Rick on Pawn Stars offering only $12,000 for it even after the expert's examination. "Hey, I gotta make a profit. You go open your own pawn shop and take all the risk!" But back to the film itself. This scene was always one of the reasons I loved that movie and the title character so much.
at 5:19 PM