Night of the Living Bunnies 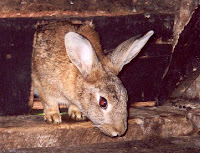 Sometimes you're just stunned by the credulity of even educated religious believers. In a debate with Jeffery Shallit, Intelligent Design advocate Kirk Durston took the pro side on the question "Are there good reasons for a scientist to believe in supernatural beings?". Shallit held his own and pointed out that most scientists don't believe in God. If you want to know why so few accept invisible magic beings, I'll tell you. THEY KNOW TOO MUCH. When you know how the world really works and understand cause and effect and natural explanations, there really is no room for gods. As Laplace said to Napoleon “I have no need of that hypothesis.”

Durston went through the usual litany of theistic arguments, including such golden oldies as the Kalam argument, the design argument, the first cause argument, the probability argument (the origin of life is supposed to be too improbable to have happened without a magic being intervening) and so on. When it got interesting though was when he reached his arguments based on God's miracles in his life. He asked the audience to consider prophecy and that "information about the future requires a source that transcends time" like Biblegod, I guess, but if old Kirk is talking about the imagined prophecies of the bible, I fear there is not much hope in that avenue of inquiry panning out with a positive result. He then went on to the next piece of evidence, supernatural intervention into an individuals life, stating that "When that happens you know God exists." Now, that's very important, for I believe it holds the real key to Christianity's hold on people like Durston and why all the other unconvincing arguments for God suddenly seem so persuasive to such minds. You see, they "know" God exists, so no debates or arguments or evidence or lack of evidence can change their opinion. I was once as they are, I too "knew" God was real, and Jesus was there with me at all times and so on. I plan on writing a post called I WAS A TRUE SCOTSMAN because so often Christians make the claim that those who leave the faith were never really "saved" in the first place. Mark Smith's encounter with William Lane Craig is instructive in this regard:

Dr. Craig, for the sake of argument let's pretend that a time machine gets built. You and I hop in it, and travel back to the day before Easter, 33 AD. We park it outside the tomb of Jesus. We wait. Easter morning rolls around, and nothing happens. We continue to wait. After several weeks of waiting, still nothing happens. There is no resurrection- Jesus is quietly rotting away in the tomb.

I asked him, given this scenario, would he then give up his Christianity? Having seen with his own eyes that there was no resurrection of Jesus, having been an eyewitness to the fact that Christianity has been based upon a fraud and a lie, would he NOW renounce Christianity? His answer was shocking, and quite unexpected.

The witness of the Holy Spirit, you see, trumps everything. That is the true key to Christian apologetics and the marvelous mental gymnastics Christians engage in when defending their ridiculous beliefs.

But back to Mr. Durston. He talked about sin and how he finally gave his life to Jesus and how he slowly found God doing great things in his life. He said his relationship with God was "the most intimate relationship I've had in my life." He admitted he has an excellent relationship with his wife and great ones with his kids and his friends, but that his "relationship" with his invisible imaginary friend "goes far deeper." Can you imagine being married to someone who says they have a deeper experience with an invisible being than with you? Kirk then said of God "I talk to him and he talks to me." Yes, Kirk, we know how real those "conversations" are. He said knowing God was "the most fulfilling experience by far" that he's ever had.

He said that Mr. Shallit had two choices in regard to these experiences, that he (Mr. Durston) was either lying or insane. Kirk, Kirk, Kirk, shame on you for reformulating C.S. Lewis' idiotic Lord, Liar, or Lunatic false trilemma as your own false dilemma. You need not be lying or insane, just simply deluded.

Mr. Durston then went on to his next piece of evidence, "physical miracles", and related a tale of a bull (bull or bullshit, you decide) on a farm, and then presented the piece de resistance, the story of the amazing resurrected rabbits! Now, I had to replay this portion of the video a few times to make sure I wasn't imagining it. I wasn't, and my worst suspicions of Durston's utter credulity on matters supernatural were confirmed. He said one day his sister's daughters pet rabbits died and were cold and stiff as boards and in full rigor mortis. Then he said one of the girls said "Why don't we pray to God to make them come alive again" so they prayed and then one of the girls (the older one?) said "I think God wants to do this in private" so they put the rabbits back in the cage, left the room and "waited for quite some time" before going back and checking on the rabbits, discovering "both rabbits perfectly fine and hopping around their cage". Durston actually said: "I have no explanation as to why two rabbits suffering rigor mortis will suddenly come back to life because two little girls ask God to make it happen"! In other words, he can think of no explanation other than "God did it" which should make one take everything he said earlier about needing God to explain life and the universe with a very large grain of salt. Assuming the basic fact of the rabbits being really dead is true, the key to this story is where one of the girls says that God needs some privacy to work his "miracle" and that they all left the room for "quite some time." Was one girl in cahoots with Mom or Dad and were the dead rabbits replaced with new, live ones? That seems far more probable then a miracle. Why else would God need to do the job when no one was looking? Sounds like a Santa Claus type incident to me, with perhaps the younger girl being protected from the harsh reality that her pets were dead. I've heard many stories of dead fish, birds etc., being replaced in just such a fashion, with a young child not knowing the difference and being fooled. But Kirk Durston believes in the resurrection version and that God has the ability to bring rabbits back from the dead, but not the dead children of grieving parents, that he will perform a miracle restoring life to the lifeless bodies of bunnies, but stand idle and do nothing while children are kidnapped and raped and killed. Which leads me to ask not only what kind of God this is, but also that if someone as seemingly intelligent and educated in the 21st century as Kirk Durston can so easily come to believe in dead rabbits rising from the grave, how much more so might first century uneducated people have come to believe in the tale of a resurrected God-man?
at 1:07 AM