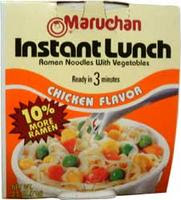 I wrote the following at another blog and received quite a few hits based on people searching for info about the safety of microwaving the Styrofoam cups that those instant noodles come in.

I had been to Walmart and bought some Maruchan Instant Lunches. I haven't really eaten those for a long time, but when I saw them on sale for .25 each I decided to try some of the chicken flavored ones. My first introduction to the food was actually rival brand Cup Noodles (I remember the name as Cup O Noodles at one time) and I've always liked them as a quick meal, maybe with some toast. I had a friend I worked with years ago who kept a large supply of Cup Noodles in his office, and he would eat one whenever he got hungry, which was often. He would fill one of the packages with water and microwave it.

Well, I decided I would have one. I read the package directions on the Instant Lunch and it instructed to heat the water on the stove and pour it into the cup or to heat water in the microwave and then pour into the cup. It did not say to microwave the Styrofoam cup in the microwave with the water already in it. Well, that's how I always saw people in offices and workplaces do it, but I followed directions and since I did not want to go to the trouble of waiting for water to boil on the stove, I just grabbed my glass mug and filled it with water. I drink a lot of tea and most of the time just fill my glass and heat in the microwave. I find the "beverage" setting gets the water hot enough for me, but not that hot. Thinking it would need to be hotter for the Instant Lunch, I set the microwave for 3 minutes on high. The mug was very hot when I pulled it out and I poured the water into the noodles and waited with anticipation. Then I thought I'd have some tea as well and got my cup and without thinking about it filled it with room temperature water. I instantly heard a noise, a little crackle and pop. I noticed immediately that my cup had two cracks on either side all the way to the brim, splitting it in two. The glass held though. But only for a few moments. The front half fell away and I didn't have a chance to catch it as it dropped to the floor, water spilling everywhere. I thought, oh no, I'll have to sweep up little bits of broken glass. But the part that hit the tiled floor didn't shatter. It just bounced and stayed intact. The glass (which I also got from Walmart) is very thick and appears quite strong. But it had been too hot when I'd put the cooler water in it, so while it could survive a fall to the floor without breaking, water did it in. If the timing and circumstances are right, anything is possible and even the strong are vulnerable.

You never know how someone is going to end up at one of your pages after doing a google search. I had someone end up at my story Bicycle Rocket Man after searching for How to Put Rockets on a Bicycle. Needless to say, my short piece offered nothing remotely helpful in that regard. Now, I don't know much about adding rockets to bikes, but I do feel slightly more competent to comment on the matter of using a microwave oven to heat precooked noodles, so here goes.

The question of the safety of microwaving Styrofoam is the main concern of those asking the question. Styrofoam is a trademarked name of Dow Chemical, but the word is often used generically to refer to any item made of polystyrene foam, a type of plastic. As long as it doesn't melt, it would appear to be safe to microwave it, contrary to the belief of many that you never should. Basically if the label says you can microwave it, then go ahead. All containers that come into contact with food are tested by the FDA for safety, making sure that unsafe amounts of harmful substances don't leak into food. Separate tests are done to insure the safety of microwave containers. My Cup Noodles container says on the lid: Due to variance in microwave heating power, it is best to boil water in a separate container in microwave. You'll notice, however, that it doesn't say you can't microwave the container directly. Again, as long as the cup doesn't melt, it should be perfectly safe to microwave. Most people who eat these noodle cups seem to just put the water in and microwave with no problem. If it is still a concern, then just boil water in a separate container and add it that way. Or, stop buying noodles in foam cups.

Now, if you'll excuse me, I need to do some research on adding rockets to bicycles.
at 7:31 PM