I stopped by Jack-in-the-Box for a quick lunch (Jumbo Jack and onion rings) the other day. I always feel guilty when I eat fried food, but I love onion rings, and most fast food places simply don't sell them, so you gotta love Jack for keeping them on the menu. I normally take my food to go and eat in the car, but I decided to eat in the restaurant this time. I got myself a table and sat down. 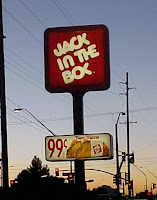 An older gentleman brought his food over and sat on one of the metal stools that face the street (it's like sitting at the counter in a diner, but with a window in front of you). He was all dressed in his bike riding gear. A woman asked him how much longer he'd be able to keep riding. "Another sixty years" he replied. He did look very fit and healthy. He was then asked how old he was and he said he was 64. He said he was going to see his 89 year old father and put him on a bike. The woman said something about being worried about getting run over by a car when you ride a bicycle. "No, I'll run them over," he didn't exactly smile as he said it, but he didn't exactly not smile either. "I'll put rockets on my bike and zoom right over those cars," he declared. He opened the wrapper on what looked like a burrito and started to eat. The woman took another bite of her hamburger. "But," she said, "it's such a slow way to get any where."

"No," the burrito eating older bicyclist stated firmly, "the rockets will take care of that problem too!" He put his food down. "And it's sure a lot better than paying those high prices to put gas in a car. I put water in me. That's h2o from hydrogen and oxygen and those are gases and I'll use those to get me where I need to go".

He seemed satisfied with his answers to the woman conversationalist. He turned to face the window while he continued to eat. He finally spoke again. "I'm going to get me a fold-up bike. Weighs about 23 pounds, probably less. I can carry it on my back and when I ride to the store I can just fold it up and take it in with me while I shop".

The woman gathered her things and got up. "Sounds interesting," she said.

"Yes, it is. The one I want to buy costs about three thousand dollars, though."

The woman was about to go out the door. "Is that with or without the rockets?" she asked.