Posted by Nick
This is from a few years ago, but the comments at the video are recent (some from today, actually) and it is consistent with the violent cop incidents taking place everyday that even Drudge is now reporting prominently. Here is a perfect example of the citizen spy culture taking root in the USA with the "If you see something, say something" program encouraged by Homeland Security. A 911 call apparently was made after a neighbor mistakenly interpreted a man sitting on a porch as a "drunk with a gun." Officers arrived, ready for battle, and the man was killed . . . while watering his friend's lawn.-http://youtu.be/u6S7LRrCru8 "Police acknowledge they never asked the man to drop what they thought was a gun" (a spray nozzle for the end of a hose) "or spoke to him in any way", and yet they were "forced to shoot" and kill him. Of course they were "forced" to do it. They committed cold-blooded murder and the criminal police culture will protect its own (imagine, however, if you or I had shot someone dead in similar circumstances). The evil (yes, EVIL) neighbor who called police to report an innocent man harming no one said on his 911 call "He's just sitting there with his legs crossed on the porch landing". Oh my god! What a threat! Just sitting there with his legs crossed! CALL THE POLICE!!! Another goddamned (yes, if there is a God you will burn in hell, you fucking cop-lover!) busybody calling 911 and the state's uniformed thugs for no good reason. The 911 operator asks the piece of shit statist if he knows what kind of "gun" the man is holding. He replies: "Basically what I can see, he's moving it back and forth, it looks like a little tiny six-shooter or something like that." This moron wouldn't know a gun if he saw it up close just before it blew a hole through his sick, freedom-hating brain. "Back and forth"? Oh yeah, he was watering! That's what you do when you're watering. 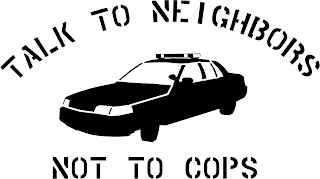 Email ThisBlogThis!Share to TwitterShare to FacebookShare to Pinterest
Labels: Cops