Posted by Nick
Boycott Naked Juice for opposing the right to know what is in our food. Their parent company spent millions to block the labeling of genetically modified ingredients in their so-called juices filled with synthetic compounds...nothing all natural about that. Truth in Labeling is not something practiced by Naked Juice.-comment by Brandon Hovey at the Facebook page of Pepsico owned Naked Juice. Go to that Facebook page to see the avalanche of comments exposing Naked Juice for the fraud they are! Naked Juice probably doesn't want you to know that it's owned by Pepsi, which donated $2.5 million to help defeat Prop 37, the California Right to Know Genetically Modified Food Act. 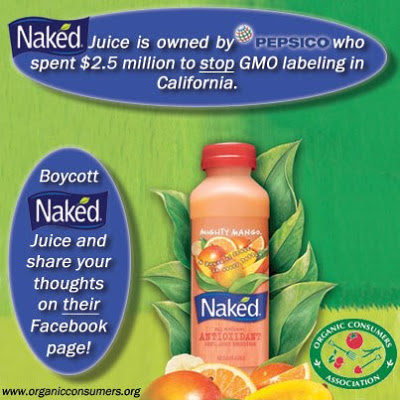 They stomped on our right to know. Now it's time to get even. Prop 37, the California Right to Know GMO labeling initiative, was narrowly defeated last week thanks to a relentless, deceitful $46-million advertising blitz. Among the largest bankrollers of the NO on 37 campaign were huge multinational food and beverage companies whose subsidiaries make billions selling some of your favorite organic and "natural" brands. Brands like Kashi. Honest Tea. Naked Juice. Muir Glen and Morningstar Farms. It's time to boycott the companies whose dirty money confused and scared millions of California voters into voting No on Prop 37. It's time to plaster their facebook pages with this message: We won't support you until you support us. It's time to call their consumer hotlines, complain to their store managers. It's time to tarnish their holy organic and natural images, to expose their hypocrisy and greed. It's time to raise a little hell.-Payback Time! Boycott the Brands that Helped Kill Prop 37