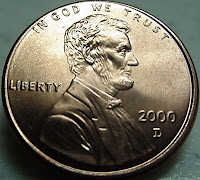 This story (Via Check Your Premises) gives one some hope for the next generation. A group of 29 7th and 8th graders, fed up with only a 30 minute lunch period, protested by using pennies to pay for their $2.00 lunches.

School officials were not impressed and began doling out detention like sloppy Joe's. In all, 29 students received punishment. Administrators told them that what they had done was "disrespectful" not only to cafeteria staff but also to fellow students. (Yet on Friday, many of them brought bag lunches to protest on behalf of the so-called "Readington 29.")

But as news of "Pennygate" began spreading, it soon became clear that this cause was bigger than even a silver dollar. Parents and civil rights advocates, outraged at the school's position, began raising a stink. The story received nationwide coverage.

A couple of pro-government goose steppers gave their two-cents worth in the comments:

I am all for the first amendment, but those rights DO NOT extend past the school house gates. As teachers we have a solemn obligation to protect our students first and educate second. To achieve that we must maintain discipline. What kind of school would it be if kids were running wild and crazy through the halls and calling it a "protest." Teenagers can call this unfair, but it is the price they pay for a free education.

Where does this "teacher" see anything in this story about kids "running wild and crazy through the halls"? Of course any dissent, even of a peaceful nature, cannot be allowed in the public schools, because the whole purpose of the government (fascist) school system is to teach obedience and discourage independent thought. That is the real "price" we as a society are paying for this "free" (I like the way this tax supported leech that calls itself a "teacher" is under the impression that publik skool edukashun is somehow free) service. Of course it is more like an indoctrination, not an education, anyway.

The school caved and it is a disgrace. Stand up for what is right.

That's what those protesting kids were doing, you jackass Big Brother-loving loser!

Here is an explicit statement of the real purpose of state schools, as outlined by some black-robed tyrants in California: "A primary purpose of the educational system is to train school children in good citizenship, patriotism and loyalty to the state".

Loyalty to the state. Sounds very Nazi-like, don't ya think?
at 9:28 AM