Posted by Nick
"Liberals" are delicate creatures. They can't take shocks like this...

"The girl is thought to be an 18-year-old living in Canada and narrates her videos in a sweet, girlish tone. YouTube were alerted to the offensive nature of her videos when she was the subject of a video by fellow vlogger Leafyishere. The video was called ‘The Most Racist Girl On The Entire Internet’. The teenager has openly admitted to being a Holocaust denier and has called Hitler a “brilliant” and “compassionate man”. In her videos she has said: “Do you hate Jews as much as I do?” and “Do you want to know how to spot a Jew”. On Hitler’s birthday, she filmed herself singing Happy Birthday in front of a picture of the Nazi leader.- Racist video blogger Evalion booted off YouTube after posting shocking videos where she praises Hitler and racially abuses Jews and black people 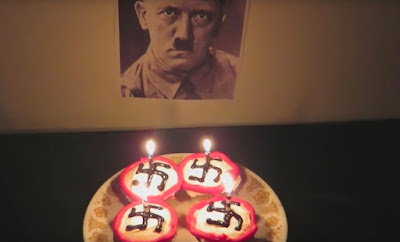 A racist vlogger has been booted off YouTube after she sang happy birthday to Hitler and called black people ''n*****' in her videos In Evalion's videos called Why Hitler Wasn't Evil and How Feminists Supported Rape by Causing the Migrant Crisis, she shared her support for Hitler. Read more: Angel-faced Youtuber, 18, is kicked off the site after sharing racist views and singing Happy Birthday to Hitler - with swastika CUPCAKES Follow us: @MailOnline on Twitter | DailyMail on Facebook