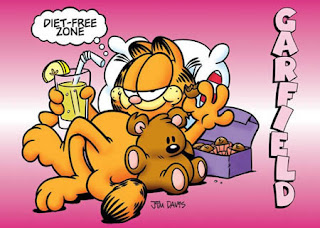 Look at Garfield in the picture above. Does he seem happy? He has his bear and his snacks and his pillow, and probably a television remote as well. He represents the average American quite well, an overweight, junk food eating couch potato, escaping the bleakness of existence through a drug of one sort or another, be it food or alcohol (liquor sales go up in economic downturns) or even imaginary friends like Pooky (Garfield's teddy bear) . Pooky, in fact, represents more than just a comforting stuffed toy; Pooky is really Spooky, the big invisible ghost that "controls" everything, and that allows so many to remain in their zombie existence, satisfied with the momentary pleasure that their drug of choice brings them, confident that somehow Spooky will "protect" them and keep them from harm and eventually make everything right. But what if we remove the Garfield mentality from the picture? What if we take away the drugs and the ghosts, what happens then?

No, on second thought, that is too bleak. I will stick with my drugs (ice cream and blogging) and my own version of Pooky, i.e., my imaginary multitudes of admirers, and remain at least somewhat happy as a result of these distractions.

Email ThisBlogThis!Share to TwitterShare to FacebookShare to Pinterest
Labels: Garfield