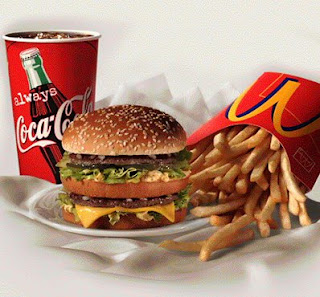 The idea of taxing fast food came up in New Jersey recently and Gov. Jon S. Corzine called it a "constructive suggestion".

"I think this country has gone too much in the direction of fast and unhealthy food, and if people are taxed they may terminate that and turn toward more healthy foods," said West Orange resident Maureen Felix.

In other words, because Maureen Felix doesn't like the way other people choose to live their lives, she wants to change their behavior by taxing it. This is a perfect example of the danger of giving government the power to rule over us. It leads ultimately to this kind of fascist thinking and policies. Most fast food may not be very healthy, but then a lot of restaurant food in general isn't good for you. Neither are many items you can buy in the supermarket. Should we tax ice cream, frozen pot pies and potato chips as well? I was sitting in Jack In The Box just yesterday after a hard day of moving and watched as an obviously not-well-to-do family enjoyed a hot meal purchased from the dollar menu. Burgers, chicken sandwiches, fries, tacos, all available for about a buck each (or in the case of the tacos, two for a dollar) and while a steady diet of such foods would not serve anyone well in the long run, their cheapness makes it easy to get out of the house and have a little fun and fill an empty stomach. If I am ever homeless, the spare change I manage to scoop up will partly be used to get a quick hot meal from such places. Thank God for fast food, and the freedom that made fast food restaurants possible. Thank the other guy and his evil minions for pro government busy bodies like miss Felix that want to control our lives. To hell with such dictators!
at 1:42 PM