Sexual Assault in the Military (the military culture, in which rapes, and the sweeping aside of rapes, happen with disturbing regularity)

The Pentagon has determined that the rate of female victims victimized in sexual assaults went from roughly 1-in-26 to 1-in-16 between the 2010 study and the most recent report. The actual number of incidents could be far greater, though, as other studies have suggested that accurate data in terms of Defense Department rapes is hard to get a hold of. - Pentagon releases terrifying statistics of sexual assaults in the military

The Rape of Petty Officer Blumer

Blumer, a standout sailor with an unblemished record, was sure she could clear things up. She wrote a statement in the crowded office that described her suspicions about what had actually occurred, and her urgent need for medical attention. Then she obediently left the room so her superiors could discuss the matter. When she was allowed in a few minutes later, Blumer was told that she would be taken to the hospital – but with orders only for a toxicology report, to see if there really were date-rape drugs in her system. "Whether you get a rape kit is up to you," the female JAG prosecutor cautiously told Blumer, who struggled to make sense of what was happening: The military she'd trusted to care for her wasn't interested in caring for her at all. She was even more shaken by the JAG's jarring question later on: "Did you inflict your injuries yourself?"

The implication floored Blumer. "How could anyone even think that I would do that to myself?" she says now. It was ­Blumer's first glimpse of a hidden side of military culture, in which rapes, and the sweeping aside of rapes, happen with disturbing regularity. And it was her first sense of what lay in store after coming forward as a military rape victim: that she would be treated with suspicion by those charged with helping her, penalized by command and ostracized by her unit. "Once my assault happened," Blumer says, "my whole future disappeared."
Read more: The Rape of Petty Officer Blumer Inside the military's culture of sex abuse, denial and cover-up 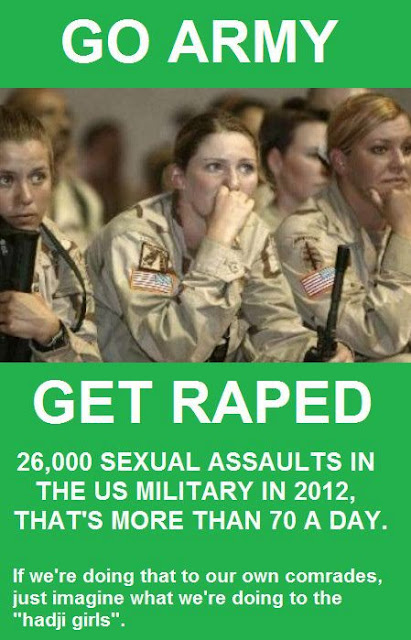