Christians, Atheists and Bears in the Woods, Oh My! 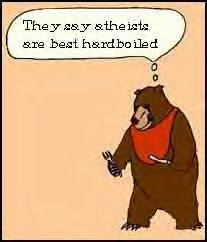 Maybe you got this in your email awhile back:

An atheist was walking through the woods.

"What beautiful animals"! He said to himself.

As he was walking alongside the river, he heard a rustling in the bushes behind him. He turned to look. He saw a 7 foot grizzly charge towards him. He ran as fast as he could up the path. He looked over his shoulder & saw that the bear was closing in on him.He looked over his shoulder again, & the bear was even closer. He tripped & fell on the ground . He rolled over to pick himself up but saw that the bear was right on top of him, reaching for him with his left paw & raising his right paw to strike him.

At that instant the Atheist cried out, "Oh my God!"Time Stopped.The bear froze.The forest was silent.As a bright light shone upon the man, a voice came out of the sky.

"You deny my existence for all these years, teach others I don't exist and even credit creation to cosmic accident." "Do you expect me to help you out of this predicament? Am I to count you as a believer"?

The atheist looked directly into the light, "It would be hypocritical of me to suddenly ask You to treat me as a Christian now, but perhaps You could make the BEAR a Christian"?

"Very Well," said the voice.The light went out. The sounds of the forest resumed. And the bear dropped his right paw, brought both paws together, bowed his head & spoke:"Lord bless this food, which I am about to receive from thy bounty through Christ our Lord, Amen."

Here is one response to it from an atheist's perspective.

Here is a shorter version: An atheist was walking through the woods and suddenly came face to face with a hungry bear. He immediately dropped to his knees and looked up to heaven. "God," he said shamefully. "I know I have professed that you do not exist and I don't want to be a hypocrite and ask you to make me a Christian now. But could you do me one small favor?"
A voice from heaven answered, "I will do as you ask."
The atheist smiled and said, "Could you make this bear a Christian?"
Feeling quite pleased with himself, the atheist stood up and brushed off his pants. He looked fearlessly into the bears eyes. The bear looked into the atheists eyes, dropped to his knees and said, "Thank you Lord for this meal you have provided."

In a forum post at talkjesus.com (billing itself as "100% Jesus") someone replied to it with this: "The atheist was feeling very smug ,wasnt he? But then when the bear,after thanking God for his lunch ,stood up ,,the atheist,(i would emagen)felt very humble and learned a good leason, looking up up up at the bear ,knowing there was no escape,found out that smugness gets one no where.The joke was very funny" (spelling and punctuation as in original).

What the atheist also learned is that animals other than humans can become Christians, that Christians have no mercy for non-believers (just like their hate-filled, hell-creating, psychotic deity) and will actually EAT them, and that God can turn any creature into an instant Jesus freak, making this the god of the Calvinists, I suppose. But if becoming a believer is not a matter of will as portrayed in this story, why berate the atheist for his unbelief? And maybe the atheist wouldn't have been an atheist if Mr. Invisible Magic Being had just revealed himself , as he does in this story, earlier in the poor non-believer's life! That's all any atheist is asking for, just some PROOF!

There are so many google results for this thing (it goes under at least two titles; The Atheist and the Bear, and An Atheist in the Woods) that are all the same, just the story itself published on the site or blog, with maybe a brief comment-LOL and I Like It! being popular ones- and maybe a photo of a bear. Why no picture of the atheist at any of these posts? Atheists are flesh and blood beings that you can actually see, not invisible ghosts that you have to imagine are there and need "faith" that they exist. Atheists are real, gods and fairy tale talking bears are not.

This thing has been going around the internet for a long time and I can't find when it first started (the earliest date I saw was 2004), but I don't care anymore, just please stop passing it on, its making you religious types look stupid, something for which we don't need any more evidence, as you guys provide us skeptics with an abundance of it already.