Posted by Nick
See Alison J. Ressler: "No Obamacare, social security or medicare for teabaggers. They don't BELIEVE in it, so leave them out of it!" So, Alison, there is no individual mandate in Obamacare? And if I don't believe in Social Security I can stop having FICA deductions taken from my paycheck? NO, I have to pay for it regardless? I see. 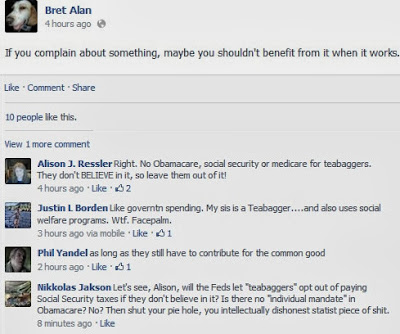 Of course, Obamacare is a train wreck that doesn't work. So, I'm sure many would love to be "left out" of Obamacare. And since Alison thinks "teabaggers" should be left out, I'm sure she must support the Republican's attempt to at least delay the individual mandate. Or perhaps, like many "liberals", poor Alison is just intellectually challenged and thinks Obamacare is a means-tested social welfare program rather than a REQUIREMENT to buy health "insurance". Or maybe she really thinks it's okay to force people to buy something and then deny them the right to use it. At this point it gets confusing, as it's not really clear what she means by "leave them out of it", because Obamacare is all about NOT leaving people out of it.
at 10:01 PM