Posted by Nick
I've presented my views on animal rights before. In a nutshell, they don't have any rights because they aren't human. I do think humans have a duty to manage animal resources, both domesticated and wild, as responsibly as possible, balancing human and animal needs, and to look out as much as possible for animal welfare. But any talk of animals being "equal" to humans is insane. Does a mouse have equality with a human being? If rats have infested a city and are spreading disease, must we not exterminate the vermin? Do rats have a right to reproduce at will, or vote in our elections (wait, they don't have any ability to understand the concept of voting, do they) but I think I make my point quite well. 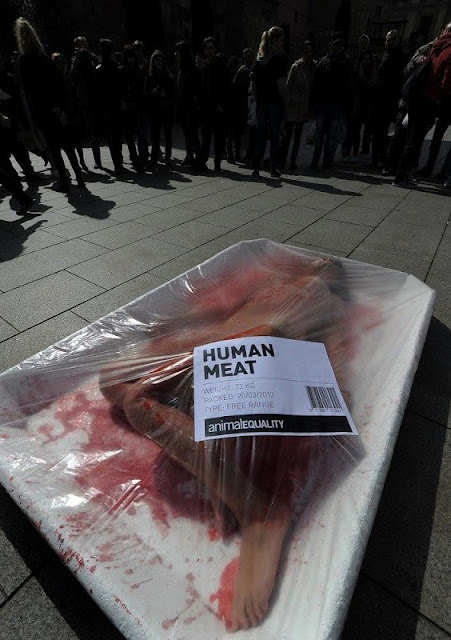 Animal rights activists from the group “Animal Equality” staged a demonstration in Barcelona, Spain, in front of the Cathedral of Barcelona, during “Day Without Meat” event on March 20, 2013. Demonstrators simulated raw meat packaging found in supermarkets, by covering human models with fake blood and plastic sheets, in an attempt to raise awareness and move people to stop eating meat.

Question: When are they going to protest lions eating zebra meat?
at 4:43 AM